How to Make Spaghetti Sauce

First, start with an obscene amount of tomatoes. Yes, "obscene" is a measurable amount. Basically just fill your laundry basket with tomatoes until your mind starts screaming in protest. That's "obscene". 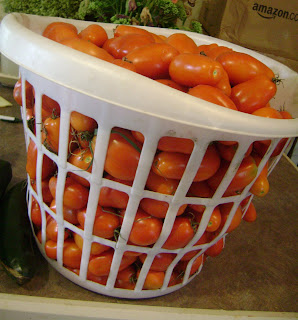 Aren't tomatoes pretty? When they're perfectly ripe, they resemble beautiful, plump dragon eggs. This, of course, is according to my son Peter, who is an expert on dragon eggs. I prefer my tomatoes - uh - "dragon eggs" to be of the Roma variety, but that's just me. You can use whatever tomatoes you have on hand. Romas seem to be less watery than other types, though, and we're going to go through a great amount of effort later to remove excess water from the spaghetti sauce, so help yourself out and use Romas. You know, when in Rome, use Romas . . . 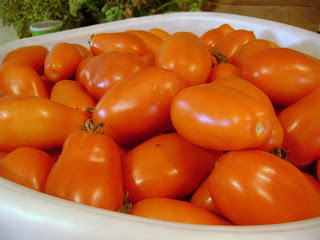 Now we're going to behead each and every tomato a la Madame Guillotine . Use a sharp knife for this. Don't waste your time cutting tomatoes until you've got a beautifully sharp knife. More kitchen accidents are caused by blunt knives than anything else (other than toys underfoot. That can be treacherous, too.) 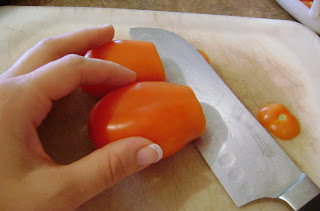 Meanwhile, get some water boiling in the largest pot or steamer you can find. Since I'm too cheap to buy a real steamer, I've rigged up something else. It's a colander which I drop into a large soup pot. Getting it out of the boiling water involves using tongs and swear words, but it adds spice to the spaghetti sauce, I think. 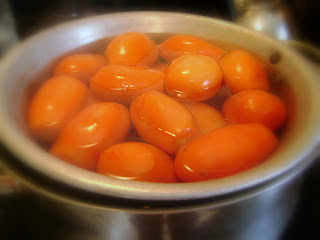 I find that 5 minutes is long enough to get the skins loosened nicely, but you can add a minute or more if you like. Anything longer than 8 minutes, though, makes a soupy mess. Then, of course, you can make tomato soup. Tomatoes are very accommodating. They're the peacemakers of the fruit family. (Yes, tomatoes are FRUITS, not vegetables.) 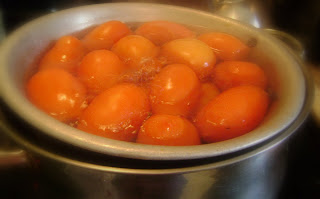 Incidentally, this is a colander my Oma gave me when I was just married. I believe she brought it with her on the ship when she and Opa immigrated to America from Holland. This colander has been places, I tell ya! (That's why it's lopsided. Somewhere along its many journeys it got rather flattened at the base. ) 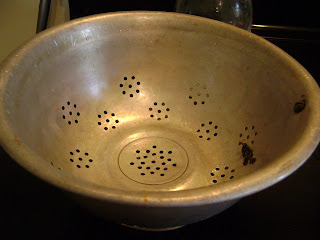 Once the tomatoes are nicely hot and piping, remove them and dump them in a pot of cold water or a clean kitchen sink. Since a clean kitchen sink isn't something that often appears at my house, I use a pot. Here's why you should use a colander/steamer for the tomatoes - you can immediately put more tomatoes in the soup pot, without waiting for "new" water to heat up again. I'm all about economy. 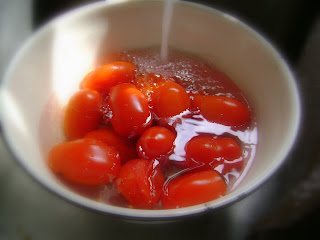 Let them sit for a minute or so until they're no longer hot enough to burn your fingers off, and then slip them from their skins into your food processor. I suppose you could use a blender, but I've never tried that. Popping the skins off of tomatoes is strangely satisfying, rather like picking a scab. Ewww, that's gross, sorry. (It's true, though.) 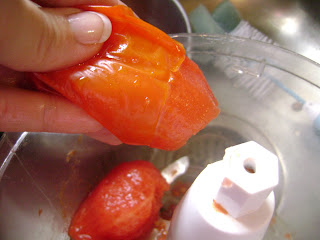 Once your food processor is almost full of naked tomatoes, it's time to add some funk. I like to put in some green peppers (one per quart of tomatoes). Just chop them into chunks. The processor will take care of the rest. 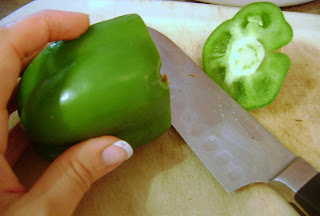 Onions are next. Again, I use one onion per quart of tomatoes. Even if you don't like onions (poor soul, I pity you), add them anyway. The processor chops the dickens out of them, so you won't know they're there. Just make yourself forget. You can do it. 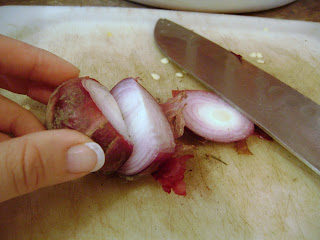 (Oh, here's a handy tip about cutting up onions tear-free: if you have an open flame going, it'll reduce the amount of onion gas that gets to your eyes, thus fewer tears. Also, by "open flame", I mean a candle. Bonfires in the kitchen are not recommended.)

Finally, add your spices. You can put in whatever you like, but I add garlic, salt, rosemary, basil, and allspice. I don't usually measure, but I put in about a teaspoon of everything except the basil, and the that gets about a tablespoon. 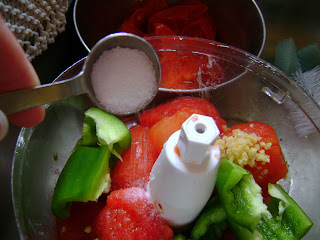 Next, blend it to smithereens. That's such a fun word, "smithereens". It almost sounds like a fun kind of candy. 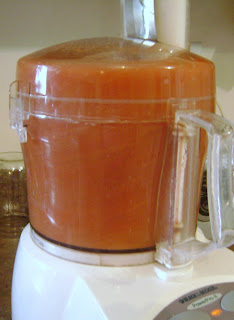 Once the quart of tomato and spices is blended, put it in a 9x13" pan and place in a 325 degree oven. I'm fortunate enough to have a convection oven which I use for things like this. 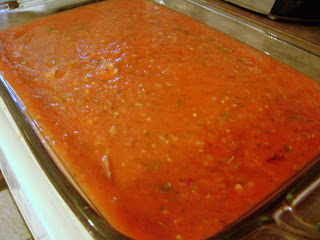 Set your timer and give your spaghetti mixture a stir every 45 minutes until it's the consistency you want. Depending on the type of tomatoes you have, this can take around 2 hours. 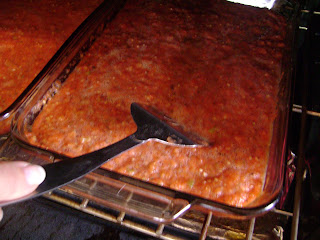 Put the sauce into a canning jar, either quart or pint sized, leaving about an inch of head space. You can get cool funnel things to help getting the sauce where it's supposed to go. When canning season is over they make fun hats for toddlers. Put new lids on the jars and screw on the rims. (You can reuse rims, but lids must be new). 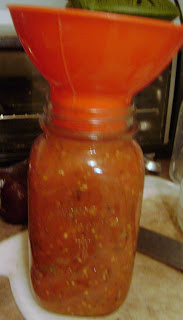 Now you need to get your water bath going. Some people call this a canner. If you don't have an official canner, you could always use a soup pot and put a trivet on the bottom. It doesn't really matter, as long as the jars aren't sitting directly on the bottom and the water can cover the tops of the jars by 1 inch. 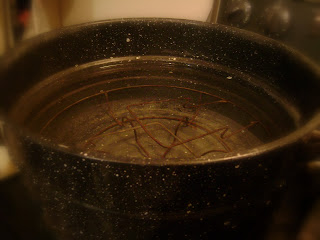 Once the water is a full rolling boil, put your jars in. Pints need to stay in for about 15 minutes and quarts about 20 minutes to seal. When the time is up, pull them out and let them sit for 30 minutes or so until they've sealed. You'll know they're sealed when the lid is indented down. If you can push the lid up and down in the middle, you need to put on a new lid and repeat the canning process. 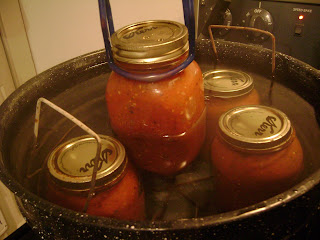 Finally, add your labels! I suppose you could just write on the lids, but after all the work you've gone through to get this stuff made, why not make them pretty? These labels I've designed with the Printshop program, but you could easily make up your own with a regular document writer program. I just print them out and affix them to the jars with tape. (Isn't "affix" a great word? It sounds so professional and hoity-toity and all that . . .) 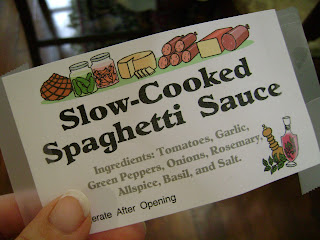 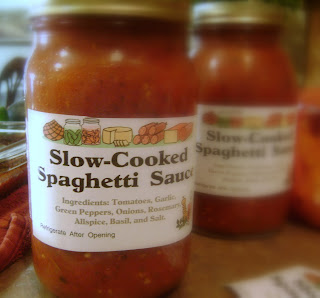 Then get out a big bottle of wine and ask yourself why you do this every year. Get out another bottle and repeat the process the next day and every day until the tomato bushes are dead.

wow - our very OWN Martha Stewart in the family!!! I felt like I was watching the Food Network when I was reading your blog...I know you probably haven't seen Alton Brown from Good Eats on the Food Network, but you could totally be him.

This was hilarious (I nearly died laughing when I read "Getting it out of the boiling water involves using tongs and swear words, but it adds spice to the spaghetti sauce, I think") but this was also very educational! I was amazed at all the steps you go through for canning! what an awesome blog post though...thanks for sharing the pics too! you are definitely the Martha Stewart of the family, obviously without the stock trading conviction :)

At least you have tomatoes.My mom has 3 huge plants that keep blooming but the blooms will not set.She has a grand total of 3 tomatoes this year.Sad.
Your sauce looks yummy!

Wow! I can't believe you cooked up that much, er, dragon egg sauce! I am very impressed! I had never thought of baking sauce, but that makes a lot of sense.

That looks awesome! You have any dragon eggs ya want to get rid of?

Look out Martha! Where's the part about the knitting?...just kidding. That is a lot of tomatoes!

Wow, we certainly do have a domestic goddess on our hands! You are amazing! Save a jar for us. :)

Where are the kids hiding through all this!?...or are you doing this in the midnight hours? Hope you get to rest soon! :)

Thanks for the tutorial! My word, though...that sure is a lot of work!!
I used to make my own tomato sauce way back when we grew tomatoes, but for the freezer only. I've never canned anything. My Mom used to make pickled watermelon rind. I still have her(very old) clamp type ball jars in my attic.

Wow, I'm impressed! And you even have perfectly manicured fingers throughout the process! You are like wonder woman!

I want some of that for Christmas (the sauce, not the wine)... Funny, funny. How did you get those manicured nails whilst changing diapers, making tomato sauce, washing dishes, etc. I'm suspecting that perhaps this is a mannequin hand!! FAKE!!! I caught you!!!

Yum!! I had heard that Romas were the best for canning. I'm thinking I'll plant a ton next year - I'd like to make my own sauce too. Thanks for the step by step lesson. :D It looks so yummy!