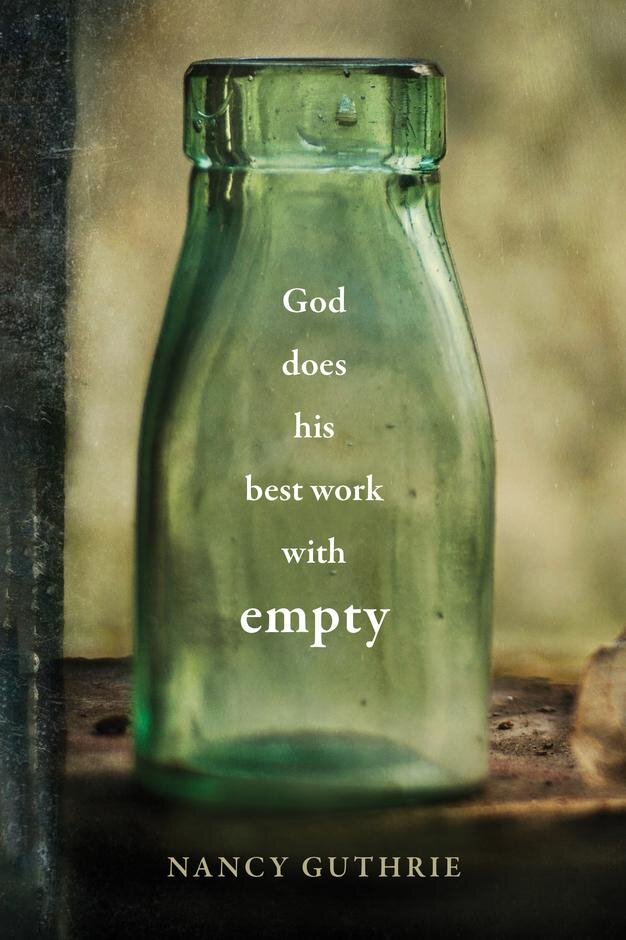 I'm currently doing a Bible study with some of the ladies in my church. It's called, God Does His Best Work with Empty by Nancy Guthrie.

Today, for part of the reading, the study guide directed me to read through the book of Ruth, paying careful attention to the theme of loss and emptiness. If you're familiar with the story of Ruth, then you'll know that it begins with Naomi, who, because of a famine in Judah, travels to the country of Moab with her husband. They settle there, and she has two boys, who grow up and then marry two women from Moab. In the course of things, Naomi's husband dies, and then later her two sons.

In that culture, to lose the men of your family would have been devastating. Aside from the personal grief of losing your closest relatives, a woman without the "protection of a man" was in an extremely vulnerable position. I can't imagine the fear and grief that must have consumed Naomi. That poor woman.

Upon hearing that things have gotten better in Judah, she decides to pack up and go back to her hometown. Both her daughter's-in-law offer to go with her, which is telling. Naomi must have been a remarkable woman for these two young widows to offer to uproot themselves to go to a foreign land with their mother-in-law. Totally not the typical relationship trope of daughters-in-law to mother-in-law!

Naomi tries to convince the two women to return to their family homes, and eventually, one of them agrees. Ruth, however, refuses to go, citing one of the most beautiful passages in Scripture:

"Entreat me not to leave you,
Or to turn back from following after you.
For wherever you go, I will go:
And wherever you lodge, I will lodge;
Your people will be my people,
And your God, my God.
Where you die, I will die,
And there will I be buried.
The Lord do so to me, and more also,
If anything but death parts you and me."
Naomi, now accompanied by Ruth, finally reaches her hometown in Judah, which creates quite a stir (it must have been a somewhat small town, or else Naomi's family must have been well-to-do). When questioned about her life since leaving Judah, Naomi says, "Do not call me Naomi; call me Mara, for the Almighty has dealt very bitterly with me."
This is the part that struck me this morning. In her moment, at that moment, Naomi was overcome with grief and loss. How adrift and destitute she must have felt! How humiliated, to have left as a young married woman, and then to have to return as an old widow with only a foreign daughter-in-law to show for all her efforts!
It's only natural that she should see her circumstances as "the Almighty dealing very bitterly with me." In one way, she was absolutely right - it was the Almighty's doing, and in that moment, His doing was hard to bear.
- And yet.
- And yet, He did not leave Naomi without comfort. At that moment, Naomi wasn't fully seeing the value of Ruth, who was standing right next to Naomi. She only saw her moment, which, let's be honest, was awful.
But that's not the whole picture. The bigger picture shows us the beauty of Naomi's story. How Ruth ends up marrying a wealthy man named Boaz, an honorable man who provides for Naomi for the rest of her life. Ruth and Boaz have a son, thereby giving Naomi a grandson to hold. As the book of Ruth ends, it says,
"And they called his name Obed. He is the father of Jesse, the father of David."
Wow. What a fabulous Big Picture.
But of course, Naomi couldn't see that, especially in her moment of grief. In fact, she never even got to see the overall Big Picture of King David being her great-great-grandson.
And that's where faith comes in. It's faith that marries the belief in the Almighty's goodness with the reality of the Almighty's dealings.
In our culture, it's popular to say, "I have faith," or, "I'm a person of faith," as though it's an accessory to an outfit or an emblem to put on a hoodie. This sort of faith is cheap, like Rue21 jewelry that easily breaks or Walmart clothing that quickly fades.
Big Picture Faith, however . . .
Wow. That's something durable. It's priceless.
Posted by Rachel at 9:47 AM

Email ThisBlogThis!Share to TwitterShare to FacebookShare to Pinterest
Labels: Christianity